• DR HRISHIKESH PAI,MD, FCPS, FICOG, MSc, is one of the country’s leading gynecologist. His preeminence in the field of Gynecology had enabled him to achieve the premier position as the Past Secretary General of the Federation of Obstetric and Gynaecological Societies of India (FOGSI) which is one of the largest organization of professional doctors in the country consisting of 33,000 Gynaecologists. Previously Dr. Pai was the Senior Vice President of FOGSI in 2006.
• Dr Pai is also the pioneer in the field of Infertility and IVF since 1991 He presently is the director of the Bloom IVF Group which runs eight IVF centres all over India including Lilavati hospital Mumbai and Fortis hospitals in New Delhi, Gurgaon, Faridabad, Mohali and Navi Mumbai and Sakra World Hospital, Bengaluru. In order to enable poor patients to have access to advanced services. Dr Pai also has an IVF unit in the D.Y. Patil Medical College. He is the first doctor in India to introduce numerous innovations in medical fields such as assisted laser hatching, spindle view, ovarian tissue freezing for cancer
patients, oocyte freezing, IMSI and embryoscope. In appreciation of his enormous contributions the international agency Frost & Sullivan bestowed upon him the best IVF group in India award in 2013. Additionally he was elected by his colleagues to the highest position in IVF namely the President of the Indian Society for Assisted Reproduction (ISAR) in 2015. In appreciation of his work Dr Pai was elected as the Member – Board of Directors of the World body of Infertility namely International Federation of Fertility societies(IFFS) : a first for an Indian . 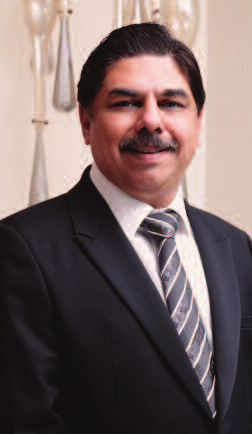 • Dr Pai was instrumental in introducing office Hysteroscopic surgery first time in India. He has contributed to the country’s family planning programs by running one of the most successful laparoscopic program, for which he and his father the late Padma shri & freedom fighter dr Dutta Pai have received numerous awards. In appreciation of his path breaking work in endoscopy, Dr. Pai was elected as the President of the prestigious Indian Association of Gynecological Endoscopists in 2008. Dr Pai has been a versatile and dynamic doctor working actively for the betterment of women and child health. In 2008 he was elected as President of Mumbai Obstetrics & Gynecological Society.
• Dr Pai has been a leading teacher and academician. He has been assistant professor at the D Y patil Medical college, the adjunct assistant professor at the eastern Virginia Medical school USA and the post graduate teacher at the MD and DNB examinations, National Board New Delhi. He has had many articles and research papers published in national and international books and journals & has delivered more that 500 guest lectures all over India and abroad. Dr Pai has also actively contributed to various central and state government policy making bodies. He is member of the still birth committee of the Ministry of Health, GOI, New Delhi 2015. He is also been invited as an expert to suggest changes to the ART Bill 2013 by the ICMR, New Delhi in 2014. He is also a Member of the three special committee of Government of Maharashtra, to suggest changes to the ART Bill 2013 & PCPNDT act regarding Infertility in 2013 and 2015.
• Dr Pai has been the Honorary Asst. Consultant for Kurla Municipal Hospital, serving patients for free from 1991 till 2007. He has been a past twice Community Service Director of Rotary Club.He had won the best interns prize for vaccination program in the Mumbai slums of Malawni. Recently in another first of its kind in India Dr Pai as president of Indian society for assisted reproduction has launched project hope. In this poor patients below poverty line (BPL) can obtain IVF services free of charge in private clinics of ISAR members all over India In appreciation of the yeoman scientific , medical and community service, Dr Pai has been the recipient of numerous awards such as the Rashtriya Ekta Award, Indian Medical Association (Mumbai west) best doctor award, Navshakti newspaper Award ,Jai Hind College alumni award, RK Trust Award, Medscape India National Award, Lions International Gold Award, Ferticon Life time
achievement award, Dr Kanal Goel National Indian Medical Association award, Doctor of the Year Award by National IMA amongstothers.